It was 9:20 central time and Steph Curry was hoisting the coveted MVP trophy that I predicted he would win before the year began. The crowd is going wild in support of their MVP. The Warriors are laughing and congratulating him as he walks back towards the bench. This team had no worries. Why would they? They just blew their opponents out by 20+ for the majority of their prior game

That last game was to be expected. Although many would disagree with the focus of the defensive and offensive schemes being centered around the front court, they would forget that at one point Marc Gasol was an MVP candidate, and Zach Randolph is the tone setter. However, Conley is the best player on Memphis.

His numbers are nothing impressive. His stat line this season:

His career numbers are: 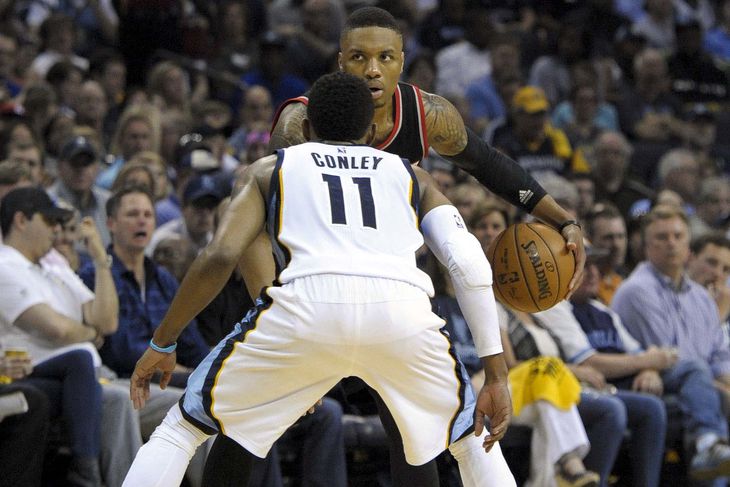 In the series against Portland, Lillard averaged 18 ppg, 4.0 apg on 35% shooting when Conley played. Compared to 27 ppg, 5.0 apg on 47% shooting when Conley was injured and unable to play. Lillard’s stat line for the season was 21 ppg, 6.2 apg, 43%FG. The numbers are staggering in this aspect. Lillard is considered by many to be a top 5-7 PG in the league. Conley reduced him to just an average point guard. It’s not like Lillard is bad in the playoffs, or known as a choker. In fact it’s quite the contrary as I think many of us can remember his heroics last year. But Michael Conley reduced him to a 18 and 4 after thought.

The Warriors completely demolished the Grizzlies in game 1 when, of course, there was no Conley in place and Curry shot 8/18 for 22 points and 7 assists in a pretty easygoing day. With Conley in place in game 2, Conley came out strong early scoring 9 quick points on 4/4 shooting in the 1st quarter. All of the Warriors struggled, but this was not just any game. Curry had hoisted the MVP only 48 minutes before halftime when they were down 39-50. Only the second time all year that the Warriors didn’t score 40 points.

Curry usually likes to let things come to him and only take over if he absolutely has to. When his team was struggling against the Mavs earlier this year down 18; Curry dropped 50 and the Warriors ended up blowing the Mavs out.

Curry was looking to take over late in the game but Conley and the rest of the Grizzlies were not going to allow it. Doubles came at him nonstop and he never really found his shot all night despite shooting just under 50% for the game on 7/19 shooting with 19 points.

The pace of the entire game centered around how Conley wanted it to be. When he wanted to slow it down and give his bigs their space to work, he did; and if he saw someone leaking out on the break, he pushed it down the floor for the easy bucket. Every time Curry tried to push the pace, Conley would stand firm and not allow him to do so.

We all know Conley is a good PG. That isn’t the issue. The problem is he’s the after thought PG when talking about great PGs in the league. Nobody dares to put him the conversation with Kyrie, Lillard, Westbrook, Chris Paul, Wall, etc. He’s always put in the same place as the Jeff Teagues of the world. My question is why? In a conference full of elite PGs, Conley is able to take every single one of them off of their game. Conley completely dominated Lillard in 3 straight games. Actually so far this entire playoffs, Conley has not been outplayed in a single game. In 3 games against a top 5-7 PG and 1 game against the reigning MVP; Conley is undefeated so far. I’m nothing close to a Conley fan nor a Memphis fan, in fact I hate them and their stupid ugly basketball team, but I do appreciate someone with unheard talent for the game. He should be recognized when he competes with the great PG infested league we are in today. Not saying he is better than the reigning MVP or Westbrook or Chris Paul, but that he should be in the same conversation as them. Not the “oh yeah that guy in Memphis is nice too,” guy. Conley is not perfect at any one thing but he’s really good at a lot of things and it needs to be recognized, and with him going head to head against Curry in this series; it should highlight nationwide how great this player really is.

If you were to ask a fan at the beginning of the season ”Which point guard is going to have a breakout season this year,” most would’ve said Kyrie Irving. Others would’ve mentioned guys like John Wall, Stephen Curry and Derrick Rose; players who are stellar but haven’t reached their peak due to injuries. Another player people would’ve mentioned is Eric Bledsoe. Ranging from fans to NBA Executives, everyone figured that once Eric Bledsoe became a starter, for a team other than the Clippers, he would emerge as a top guard. The player people barely mentioned was Damian Lillard.

Now in his second season, the former Rookie Of The Year has improved a lot. He’s smarter, quicker and stronger. He improved his perimeter game, thus making him a better scorer. Defensively he’s not lockup just yet, but compared to last season he has improved.

Lillard also possess a few intangibles. He has the clutch gene and has proven to be a pretty good leader. Because of his play, rumors and conversations about Lamarcus Aldridge leaving have been put to rest; his play is also another reason why the Blazers are one of the top teams in the West.

Let me just make this clear, Damian Lillard is the real deal. And he’s heading toward the top, fast.