These two teams are so vastly different in their makeups. You have Cleveland, a team who relies on many ISOs from their main two guys Kyrie Irving and LeBron James. While the Hawks on the other side rely on heavy spacing, ball movement, and 3 point shooting. Cleveland has had to deal with many injuries while the Hawks have been completely healthy for the most part this post season.

During the regular season, Atlanta won the series 3-1 which included one blowout, but that was early in the season when Cleveland still had Dion Waiters on their team.  We’ve seen these two styles clash before in the postseason, so the question is: how will it play out? Let’s break everything down. 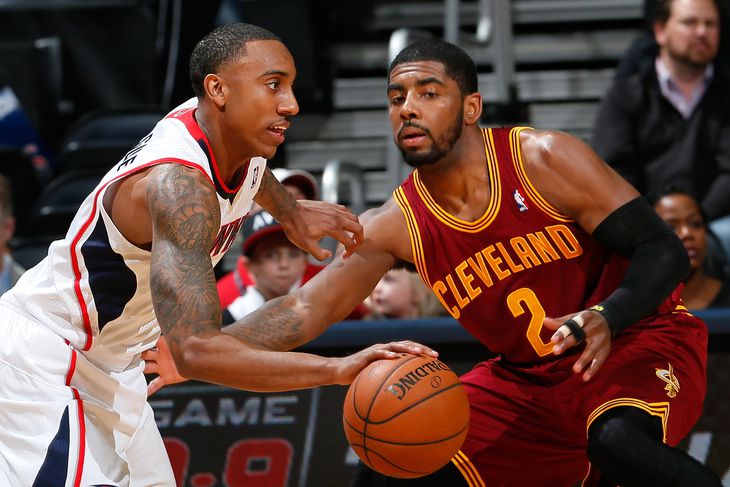 Atlanta has to keep the ball moving. Ball movement is what got Atlanta the #1 seed in the East and there have been too many times this postseason where they have gotten stagnant in stretches. If the ball isn’t moving, especially against Cleveland, then this will be a very quick series.

Their defense is not up to par with anyone else left in the playoffs and they will get exposed unless that changes. LeBron and Kyrie could really kill this team in ISOs as they don’t have outstanding defenders to match up with either player, especially LeBron. Teague might give issues to Kyrie at times, but they have absolutely no answer for LeBron in this series.

Kyle Korver is the life of this team on offense. If Korver is off for most of this series, then it will be over quickly. Korver takes on so much attention from the defense with his shooting that he has to be knocking down shots to open things up for Carroll, Teague, and Horford.

Cleveland has to run the 3pt shooters off of the 3pt line. The Hawks rely on their spacing to create everything and if you take that away, they become an average team. If they don’t run those shooters off, then they will slaughter the Cleveland defense with their pinpoint ball movement.

This is a series meant for LeBron and he should take advantage of it as much as possible. This could be one of those series that defines LeBron’s greatness because he could easily dominate each of these games from beginning to end on the offensive side of the ball.

Although JR Smith is starting in this series, I wouldn’t be surprised if Shumpert ended up playing more minutes. The last thing they can allow is Korver to get off easy 3s, and I just don’t like that JR vs Korver matchup. Don’t be surprised if they move Shumpert on to Korver to run through the infinite screens he’s going to have set..

Prediction: Cleveland wins 4-2. I believe for two games Atlanta will be hot, and when they’re hot they’re nearly impossible to beat. I believe at some point there will be an adjustment made that takes Korver out of the equation, and if that happens game over. LeBron should dominate Carroll, and despite Carroll improving a lot on defense, he should have no chance against the best player in the world.

This is obviously the series that everyone is looking forward to. It is believed by many to be the series that determines who will be representing the Eastern Conference in the Finals. There are great storylines everywhere in this series. LeBron trying to bring his hometown its first championship in 40 years, the rise of Jimmy Butler from role player to superstar, Rose playing in his first playoff games since 2011; showing us what he has left after multiple injuries, or even Pau Gasol, who was thought to be way past being an essential piece to a championship team, but is easily the most important player on the team now. However, the question is: Which of these storylines will have an ending worth telling?

The Cavs were struggling early on this year, but made some great moves in the middle of the season which has changed them from an average team to a team that could take the Eastern Conference. JR Smith and Iman Shumpert look reborn after leaving New York, and Timofy Mozgof has literally become the most important player on the team with the best +/-. The Cavs are an athletic team and they try to use that as an advantage every time down the floor. On offense at times they are unstoppable when they move the ball. On defense though, without Mozgof in, it can get real ugly real quick.
For The Bulls this year, we honestly don’t know what to expect. The playoffs so far this season have been the only time the Bulls have had everyone healthy. They have so many players capable of taking over games if needed that it’s ridiculous. Whether it’s Jimmy G Buckets hitting a dagger 3, Mirotic dropping 20 in the 4th, Rose hitting a mean crossover pull up jumper at midrange, or even players like Etuwan Moore; the Bulls seem to always have someone willing to step up and make the big shots when it counts. The defense Chicago is normally known hasn’t been up to their standards of the past years, but the team still has the pieces to lock down when they absolutely need them to.
STARTERS:
PG: K. Irving vs D. Rose
SG: J. Butler vs JR. Smith
SF: M. Dunleavy vs L. James
PF: P. Gasol vs T. Thompson
C: J. Noah vs T. Mozgof
Keys:
It will be interesting how things go down the stretch for the Cavs and how they choose to run their offense. Near the end of games it gets stagnant and becomes a whole lot of ISOs which can be bad if the Bulls play it right. The Cavs need to keep the pick & rolls going to make the defense pay attention to the other guys. If you don’t keep them on their toes and run a lot of ISOs, then the Cavs will end up getting burned by it.
This series will be mainly determined by not the best player in the world, but the best two point guards. If Rose ever outplays Kyrie in a game, the Cavs will lose plain and simple. If Rose beats Kyrie, this series will end quickly. Kyrie needs to score at least 25-30 for his team to win especially with Kevin Love out for the entire playoffs.
Jimmy Butler by the stats is easily the best defender in the NBA to put on LeBron but the part that should worry the Bulls is if he can lockdown on the defensive end while still being able to drop 20 points on the offensive end.
The Cavs are coming in hurt. Kevin Love is out and even though he has been far from the “best power forward in the league” many people thought him to be before; the team relies on the spacing he gives them because defenses still can’t leave him open.
LeBron just needs to keep everyone involved and Mozgof needs to be in the game as much as possible. Tristan Thompson is the X factor in this series. If he can come into the starting lineup and prove to be a valuable asset against starters, it will be a huge boost in favor of Cleveland.
Bulls win the series 4-2. The Bulls are coming at full throttle and the battered Cavs will have a lot of problems keeping up. JR Smith has potentially doomed another one of his teams making a stupid decision that has forced him out of 2 games. Derrick Rose needs to shine and show us the Rose we remember from his MVP season, because if he can win his matchup, the Cavs will have no chance of winning this series. Oh and the Noah versus LeBron, and Noah versus Cleveland rivalries should be fun.
To see Noah’s thoughts on Cleveland click below.
https://vine.co/v/e7InMquup6w