For the longest amount of time the Dallas Cowboys had been a mediocre team that showcased a multitude of deficiencies, year in and year out.

For a couple of years the problems came on the defensive side of the ball. While other years, it was poor O-line play, and lack of experience coaching wise. But even with those problems being at the forefront, there was still a problem that lingered and hindered them for a long period of time. That problem happened to be the lack of a run game.

During the 6-10 and countless 8-8 seasons, the ‘Boys went through a plethora of runningbacks. Guys like Marion Barber, Tashard Choice, Phillip Tanner, Felix Jones and Sammy Morris had opportunities to shoulder the load, but none of them seized control of the moment like DeMarco Murray did in 2011.

Drafted in the 3rd round with the 71st pick he wasn’t sought out to be the #1 back. He was looked at as guy, for some, who would be a decent backup to Felix Jones. Meant to ease his load as he was often injured. Little did we know Murray was going to end up being a capable back.

When Murray was coming onto the scene and taking over for Felix Jones, he started to generate some buzz and make a name for himself. He was a hard runner who had pretty good vision, but would leave yards on the field as he tended to follow his blockers. And was deemed as a guy prone to injury. Solid, but not a stud. (AP, Charles, McCoy, Forte, Foster, Lynch, Rice, Turner).

As the years went by and he progressed, there started to be talk in regards to feeding him more and let Romo take a backseat. That argument really didn’t have much spring to it until after 2013 when he played in 14 games. His most to that date.

With Jason Garrett’s coaching job on the line, Romo’s back issues, and Murray’s contract being up; the Boys decided to run Murray, much to his liking this past season to see what he could do and also because it was the smart thing to do. Murray responded by breaking Smith’s franchise record yard count with 1,845 yards, and helped Romo have a career year and led the Cowboys to a 12-4 record.

Good things happened when he was fed the ball. They maintained drives. Opened up opportunities for Dez and Witten. Kept the defense off the field. Controlled time of possession. Spectacular.

From the outside looking in Murray seemed/seems to be the sole reason for the Cowboys success when that isn’t the case at all.

Did he help? Sure, but it’s deeper than him.

In 2011: the O-line wasn’t that good and ended up being the start of the rebuilding process as the Cowboys drafted left tackle Tyron Smith in the first round. (Murray also drafted). Injuries came all across the line plus Murray didn’t play in three of those games. This team was also one of the most heavily penalized teams. Garrett was the play caller.

In 2012: the defense ended up being historically bad. (3rd worst all time.) Rob Ryan was the defensive-coordinator, and despite his progression as a player, Murray showed a knack for getting injured. Star linebacker Sean Lee missed 10 games gutting the defense. Jason Garrett was the play caller. They were still heavily penalized. Rarely forced turnovers. However, Dez was officially established. And Murray missed 6 games.

In 2013: the Cowboys drafted center Travis Frederick in the first round aiding the line. Monte Kiffin became defensive coordinator changing the scheme of the defense. Sean Lee missed 5 games. Murray missed 2 games. And Tony Romo missed the final game of the season. The defense was a record setting defense and the worst in NFL history, ever. Bill Callahan was play caller. (Offensive coordinator as well.) Heavily penalized still.

In 2014: the Cowboys drafted guard Zack Martin. (All-Pro as a rookie). Murray played in all 16 games despite getting injured. Romo played in all 16 games. Rod Marinelli became defensive coordinator. Scott Linehan became the offensive coordinator as well as play caller. Callahan was moved to offensive line coach. The defense was slightly on par with being average. Sean Lee missed the full season. This team wasn’t penalized as much as previous years, and the defense forced the 2nd most turnovers in the league.

As I stated before, Murray was a key cog in the Cowboys success but he wasn’t the main reason.

Guys like Witten, Romo, and Dez made the game easier for him as he did for them. All of those guys were already proven stars while Murray was still on the cusp.

Having Murray did hide the defense some; but how much of it was really him when the defense was second behind Houston in forcing turnovers?

His leadership on the field was nice too, but does that out do Rolondo McClain’s and Justin Durant’s leadership on the other side of the ball? Oh wait, what about Dez being vocal and rallying guys hyping them up? Was that just Murray too?

I’m guessing Marinelli making the most of what little talent he had defensively was more about Murray too.

Football is the greatest team sport there is. Each man HAS to do their job for the other to succeed. Collective effort bottom line.

With all of that being said DeMarco Murray did deserve to be paid. Just not by the Cowboys.

Dallas couldn’t have afforded him and still have money to make some moves on the defensive side of the ball. Throw in the facts that the o-line is elite, Murray is prone to injury and that he started to slow down at the end of the season and the decision is a no brainier.

Running-backs can easily be replaced. You can have a two back tandem, a three headed monster, or just one stud and have a nice amount of production. Especially with a good offensive line.

With this upcoming draft being RB heavy, the Dallas Cowboys can easily find a replacement for DeMarco at a CHEAPER cost for four more years. Simple and smart. There will be money to add new players as well as feed your own.

The Boys are playing it smart right now, which is good. They know what they are doing.

Recent history shows they have a plan… 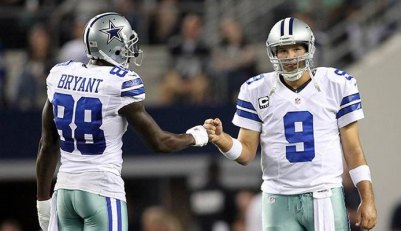 Was it really Murray making the o-line or did the o-line make RBs in general better?

Only time will tell.