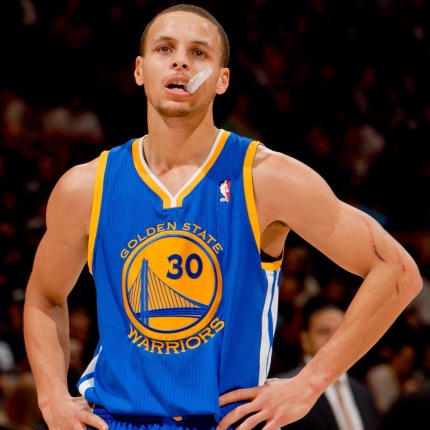 Man this kid out of Akron. No, not the kid who became a king, and not the kid who was on a national spotlight at the age of 18. The other kid out of Akron. The one who was a 3 star recruit; that wasn’t even ranked. This kid wanted to follow in his father’s footsteps and go to Virginia Tech, but they would not guarantee him anything more than a chance to be a walk on. The same kid who was said to not have the same upside as Johnny Flynn or Ricky Rubio after having multiple explosive games at Davidson. The same kid who everyone tried to write off after multiple nagging ankle injuries that seemed like they would be the death of him.

Steph Curry has become transcendent across the nation. His disregard for taking the most inexcusable shots and being a wonderful gifted passer at the same time is something to behold. You’re going to have players 10-15 years from now that grew up wanting to be Steph Curry. Therefore, I want to end this debate right now. Nobody outside of Westbrook and Chris Paul is anywhere near the stratosphere Curry is in right now. Those two I can accept, but don’t mention all these guys who either have people get buckets on them daily (Lillard), or cannot ever have a winning record without LeBron playing with him (Kyrie).

We’ve all seen how the league is changing towards outside shooting, and Steph is the spear head of that change. Let this sink in for a moment. Before Steph was in the argument for greatest shooter of all time, the argument was always thrown up whether Reggie Miller, Ray Allen, Steve Nash, or Larry Bird were the greatest. All extremely efficient but none of them ever took the shots that Curry takes. Curry nearly shot 50% this season, and all you have to do is look up any highlights against the Clippers and Chris Paul to know none of these shots are simple pull ups or spot ups. He’s arguably the best ball handler in the game and he utilizes that to create shots 30 feet from the basket. It’s something we’ve never seen and likely won’t see again for a very long time.

This past season, Steph averaged his least amount of minutes ever outside of the season he only played 26 games in. Most teams couldn’t even get him to play in the 4th quarter unless they were a worthy opponent. He shot 48% from the field, 44% from 3, and 91% from the free throw line. He averaged 23.8 points, 7.7 assists, 4.3 rebounds, and 2.0 steals. He had a PER of 28, led the league in win shares per 48 minutes, and his team was a best 122 points on 100 possessions with Steph on the floor. Steph is on a wonderfully coached team along with crazy amounts of talent all around him. This shouldn’t bring him down as an overall player in any ranking. Jordan had one of the best supporting casts ever in the late 90s and we all agree that he is the greatest player to ever step on to an NBA court, so let’s not try and bring down Steph for the same thing.

In the playoffs, Steph brought his game to another level just like he has every year since destroying the Nuggets. Averaging 28.3 points, 6.4 assists, and 5.0 rebounds all on 45% shooting from the field and 42% from 3. He took the Pelicans’ heat out with that crazy corner 3, figured out Conley then dismantled the Grizzlies play by play, took the MVP runner up head on and came out on top, and took on that other kid from Akron, The King, and kept the Cavs from making any type of comeback scoring 19 in the 4th quarter of the closing game.

This baby faced assassin has a bright future still. The Warriors have a great young core around them that has a good 5+ years left on them. Watch out everyone in the West, because I can guarantee Steph will continue giving defenses hell, breaking the system, hitting shots that you allow 99% of other players in this league to take. Curry is a special talent that wasn’t recognized for most of his life despite being the son of the sharpshooter Dell Curry. He was that other kid who wasn’t being nationally televised in high school. He wasn’t expected to be the next Jordan. He wasn’t expected to even make the NBA as an unranked player and a 3 star recruit. Now he’s making everyone pay and he’s on top of the world.