Ozzie is one of the greatest Brown’s players ever. He held the team record for receiving yards in a game with 191 which stood for 29 years up until Josh Gordon broke it. He has over 7,000 yards, 47 touchdowns, and 662 receptions. There are other options to this spot but I decided to go with Ozzie because of his toughness and the dominance he would show when the moment called for it. 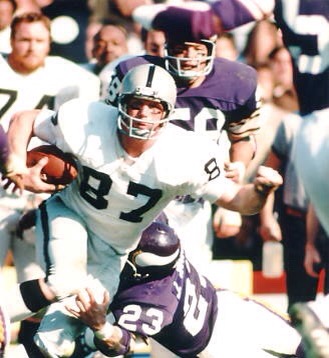 He started off very slow only bringing in 9 receptions in his first 2 seasons. However, he started producing heavily after those seasons. In a time that the games were battled in the trenches, Casper hauled in 52 touchdowns during his career. Casper was also involved in some miraculous moments. Telling the details of each one would be an article all of its own so I highly suggest you google Dave Casper and fill yourself in with all he’s done.

Known mainly for his coaching career leading one of the best defenses of all time in the 85′ Chicago Bears and as an analyst on ESPN. Best believe he was one of the best football players to ever step on the field. His numbers aren’t just ridiculous but he was a very good blocker as well which sadly can’t be shown in the stat sheet. In his first year his presence was felt by winning rookie of the year, scoring 12 touchdowns, and having 58 receptions. Alongside Mackey, Ditka helped revolutionize the position.

Witten will go down as one of the greatest Cowboys of all time and could be argued that he should be higher up on this list. He broke his jaw early in his career and still continued to play. From that point onward was when the legacy started. He is the only Cowboys TE to date to record 1,000 yards in a season. He’s a leader, and the locker room in Dallas falls in line behind him. He still has the potential to go a few pegs higher on this list before he’s done.

1996-2000 were some very good years for Sharpe. He already had some good years before then but was able to really shine in that 4 year span. In that time, he had 306 catches, 3,971 yards, and 28 TDs. The greatest moment that Sharpe ever had was his 96 yard TD in the AFC Title game which still stands as the longest TD in playoff history. You may hear him brag about himself a lot, but it is well earned by coming in as a 7th round pick and ending his career as a top 5 tight end in touchdowns.

Mackey was the main weapon for the great Johnny Unitas. They have awards named after him as he was the first great tight end to ever play. He was a deep threat. In his first four seasons, he averaged 18 yards a reception. There are few who believe he was the best ever as his numbers can’t translate when comparing his era to the tight ends who have played in the last 20 years. We can all thank him though for what the tight end position has become. 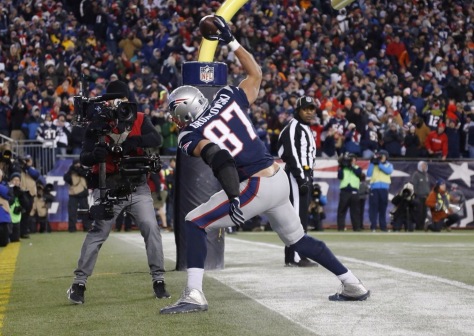 Gronk is just an absolute monster. In my opinion, the best receiving option in the game today. He’s had many issues staying healthy but his numbers speak for themselves. The man has only played 5 years and has more touchdowns than almost everyone on this list who have played over 10 seasons. In 2011, he had the best statistical year ever for a tight end posting 1,327 yards, 90 receptions, and 17 touchdowns. The yards and touchdowns are the most ever by a tight end in a season. I believe by the time his career is over he will go down as the greatest ever; leaving a huge gap between himself and the man I have at number one. 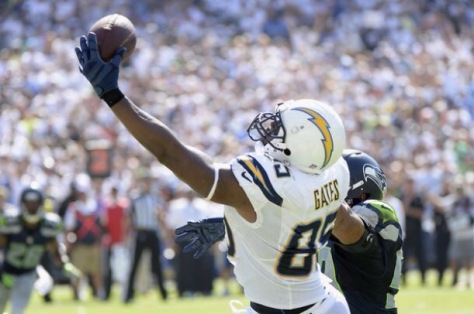 Another guy who played basketball, Gates was undrafted out of Kent State. Damn there were so many people who wish they found this diamond in the rough. Gates redefined the tight end position. Nobody had ever seen a player at this position with that type of power and speed. He is one of only two tight ends to have four seasons with at least 10 touchdowns. Another guy I really wish could get a ring but sadly it is just out of his hands. As soon as I thought Father Time finally hit him, Gates blew up this past year with 12 touchdowns. He has a very good chance of leading all tight ends in touchdowns if he plays another two years.

Kellen Winslow was a huge weapon for Dan Fouts and the Chargers offense. Winslow had the most receiving yards by a tight end ever in the 1980 season when he recorded 1,290 yards. That record stood for 30 years until Rob Gronkowski broke it in 2011. In 1981, Winslow tied a record of 5 receiving touchdowns in a single game. All of those accomplishments are great but none of those compare to his game against the Dolphins in the 81′ playoffs. He had what I describe as the best individual performance ever in a playoff game. He caught 13 passes for 166 yards and a touchdown. He also blocked what could have been the game winning field goal for the Dolphins to send the game into overtime. To make the game even more memorable, Winslow was treated for a pinched nerve in his shoulder, dehydration, severe cramps, bruised ribs, and received three stitches to his bottom lip. The picture above is of his teammates helping him off the field.

Without a doubt the greatest tight end of all time. His numbers are up there with top 5 wide receivers. He is 2nd all time in receptions, 5th all time in receiving yards, and 6th in receiving touchdowns. Coming into Kansas City, Gonzalez worked with a lot of below average guys. He wasn’t able to win a playoff game until his 16th year in the league when he finally was with a good team. It’s sad that he couldn’t add a ring to his ridiculous resume, but regardless Tony Gonzalez will always be remembered as an all time great.