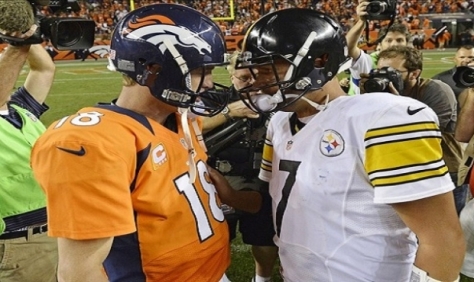 Last Saturday’s victory over the Cincinnati Bengals was not only impressive, great & epic, it proved to be costly as well. Scoreboard wise the Steelers might’ve won 18-16 but in the minds of many this upcoming game against the Broncos is where the Steelers injury riddled season ends.

Healthy, the Steelers were/are an offensive juggernaut not too many if any teams would like to face. They posses not only an All-Pro Quarterback in Ben Roethlisberger but also an All-Pro Running Back in Le’Veon Bell & an All-Pro Reciever in Antonio Brown. They also have guys like Markus Wheaton, Martavis Bryant & Heath Miller who can make plays as well. Oh, and the Steelers also have a legit guy backing up Bell in DeAngelo Williams.

The bad thing about what I just listed is….The stars are hurt….

Ben Roethlisberger has a separated shoulder. (Injured in the Cincy game.)

Antonio Brown has a concussion so he’s out for the game. (Injured in the Cincy game.)

And Le’Veon Bell has been out since Week 8 with a season ending knee injury. (Injured in a game against Cincy actually.)

Even backup running back DeAngelo Williams is out this week due to a foot injury.

The Broncos on the other hand are a lot more healthy.

Even with the inconsistent play at quarterback this season (Peyton Manning & Brock O) the Denver Broncos were still pretty damn dominant in part because of their defense.

From top to bottom the Denver Broncos are the scariest defense in football.

No Antonio Brown, Le’Veon Bell & DeAngelo Williams is going to hurt the Steelers ultimately. Throw in the fact that they have half of Ben & I don’t see them having much of a chance…. Peyton could still very much throw the game away. But that’s highly unlikely.

After being consistently inconsistent throughout the Regular Season the Packers managed to pullout a Wildcard victory against the Washington Redskins this past weekend on the road 35-18.

The Packers were able to run the football thanks to Running Backs Eddie Lacy and James Starks. Combined both players rushed for 116yds and 2TDs. Through the air Aaron Rodgers was able pass for 206yds and toss a couple of touchdowns passes. Offensively the Packers were in sync and found the rhythm they had been missing since the earlier portion of this season.

On the defensive side of the ball Green Bay sacked the quarterback 6 times, stifled the Redskins rushing attack (allowed only 84yds) and forced the Redskins to turn the ball over.

The four biggest takeaways from that game is:

Things are coming together at the right time for the Packers.

Underdogs for a majority of this season the Arizona Cardinals have been a dominant force both offensively and defensively.

The Cardinals average 30.6ppg (good for 2nd) and tally the most yards per game (408.3) offensively. On the defensive side Arizona has forced 33 turnovers (19int 14fumbles), accumulated 36 sacks and have scored 6 defensive TDs.

With guys like Carson Palmer,  David Johnson, Larry Fitzgerald, John Brown on the offensive end and playmakers like Patrick Peterson, Rashad Johnson, Dwight Freeney, Calais Campbell and others on the defensive end the Cardinals have the pieces to be successful.

The last time these two teams met the Cardinals won 38-8. They were able to sack Aaron Rodgers 8 times and forced him to turn the ball over. With Arizona sporting an elite secondary and Aaron Rodgers having to deal with an inconsistent receiving group ( James Jones, Randall Cobb, Davante Adams, Richard Rodgers) I don’t see the Packers winning.

Winners of 11 straight games, The Kansas City Chiefs are rolling on all cylinders. The defense is stout. The special teams group is solid. The offense is in sync. And above all else Alex Smith is comfortable and in rhythm.

This past weekend, in which many thought would be a nice competitive game, the Chiefs man handled the Houston Texans by 30 points all while playing on the road.

The defense forced 5 turnovers and pitched a shutout. On the offensive side of the ball Kansas City didn’t have much trouble moving up and down the field tallying 314 yards of total offense. They were able to move the ball in the air as well as on the ground. And let’s not forget about how the special teams scored a touchdown on the opening kick to start off the game.

Kansas City is the real deal.

After starting off the season on a roll New England started to let up off the gas a bit due to the injuries that hit their star players. Tom Brady was banged up. Wide Reciever Julian Edelman was out. Starting Running Back Dion Lewis was lost for the season. And All-Pro Tight End Rob Gronkowski was in and out of the lineup. The Patriots ended the season with a 12-4 record (losing 4 of their last 6) despite starting off the season 10-0.

The four teams that beat the New England Patriots were:

Each team did a nice job of stifling New England’s receivers and getting pressure on Tom Brady. Denver, New York and Miami managed to takeaway the Patriots ground game, thus making them one dimensional. Philadelphia, on the other hand forced multiple turnovers and had a defensive touchdown along with a touchdown created by the special teams unit.

All four teams manipulated the Patriots in ways the Chiefs can mirror.

For New England to win this weekend the offensive line must protect Brady (38 sacks this season) much better than they have been with Kansas City coming to town with a defense that has 47 sacks on the season (ranked 4th) and has forced 29 turnovers (ranked 5th).

Outside of protecting Brady the Patriots will need someone to step up. Gronk appears to be injured and Edelman is just now returning so counting on them to be their selves isn’t the ideal scenario. Guys like Steven Jackson, Danny Amendola and Brandon LaFell need to be ready. Or else things could get ugly (see Houston last week.)

The last time these two teams met the Chiefs won 41-14. They forced Brady into three turnovers, scored a defensive touchdown and ultimately shut down New England’s receiving core. On the offensive end that game Kansas City was able to accumulate 200+  yards rushing and toss a few touchdown passes.

In this meeting I think it’ll be more of the same. Kansas City is much better defensively and offensively this season when compared to last year. The same can’t be said for New England.

If Kansas City can consistently get to Brady and suffocate his receivers they’ll be good. As for the offense all they have to do is play smart and protect the football; establish a ground game first that way guys like Jeremy Maclin (if available) and Travis Kelce can beat them over the top later.

My Game of the Week

Here in the Divisional Round we have:

Last week Baltimore dominated the Steelers. They were able to stifle the run game, rush the quarterback and make things tough on the receivers. Joe Flacco finished the game with 259 yards 2TDs and 0 interceptions while continuing to show us that he’s an elite quarterback. Despite Justin Forsett not having a great game the Ravens still won. If Forsett isn’t contributing this week things could get ugly.

The Patriots struggled the final two weeks of the season as they barely defeated the Jets and lost to the Bills. But even with the drop off in play to end the season New England was still a dominant team. They beat two division leaders, six teams above .500 and went 4-1 against the teams that made the playoffs.

In previous years the Baltimore Ravens have had the Patriots number. Brady is 1-2 against the Ravens, but a lot of that had to deal with presence of Ray Lewis and Ed Reed. In this specific math-up give me the Patriots over Baltimore 33-24. Gronk is healthy and they have alot of weapons in the backfield along with a defense that can lockup the Raven’s receiving core.

Last week Carolina struggled early against Arizona, but turned it up later on in the 2nd half. Cam was solid (198 yards 2TDs 1int) as was the run game. Johnathan Stewart ran for 123 yards and had a TD. Carolina’s defense was able to force three turnovers which pretty much was the difference maker.

Seattle finished the season on roll and seem to be dominant once again. (Article about them here https://fortonsports.wordpress.com/2014/12/23/they-are-back/.) The L.OB. is still hell to deal with and Russell Wilson and Marshawn Lynch are dominating on the ground. But even with that success late the San Diego Chargers and Dallas Cowboys provided the blueprint on how to beat them.

Earlier this season these two teams met and the Panthers lost 13-9 having turned the ball over twice and fumbling the ball four times. Johnathan Stewart was solid but the turnovers killed them. This time give me the Panthers over Seattle 23-16. Seattle still struggles to score and the Panthers have hit their stride and the run game is dominant, which is an important asset to have when playing Seattle. FUN FACT: Superbowl Champs are 0-8 the following season in playoff games.

Last week the Cowboys had a controversial rally against the Lions. In that specific game they got dominated in the trenches resulting in them being average in the passing attack and stagnant in the run game. Defensively they forced a few turnovers  and shut down Detroit’s offense in the 2nd half keeping the game close.

The Packers were a very dominate team at home as they went 8-0. A-Rod was a monster throwing over 20+ TDs and having 0ints at home. The Packers also average slightly over 40pts at home and went 3-2 against playoff teams. ever since the infamous R-E-L-A-X quote the Packers have gone 11-2.

This match up features a team that dominates on the road (Boys 8-0) and an undefeated home team. The Packers allow around 5.0 yards per carry. Cowboys running back Demarco Murray averaged about 5.0 ypc meaning he could be primed for a big game. With Rodgers’ torn calf being an issue the Cowboys will have an advantage if they can apply an ample amount of pressure. Give me the Cowboys over Packers 34-17. They’ll dominate on the ground, force a few turnovers and of course dominate the time of possession.

Last week the Colts beat an ailing Cincinnati team that played without key weapons who pose a threat in the passing game. Luck had an alright game throwing for 376 yards and 1TD. That game was more about how the Colts had a game where they actually rushed for over 100 yards.

The Broncos have been a decent team this season. Offensively they aren’t as good as last year’s team, but this year’s defense is much better. They went 8-3 against teams .500 and above. The downside of that is the fact they went 2-3 against playoff teams.

In week one of the season these two teams played and the Broncos were victorious. The Colts turned the ball over multiple times while the Broncos were nearly flawless. But even with that it was only a seven point game. Luck and Manning are 1-1 when playing each other but this time i’m giving the edge to Andrew Luck. If he can be efficient and not turn the ball over they’ll win this game. Give me Indy over Denver 38-34.