“Never judge a Quarterback off of his first year,” is a great quote to live by.

Ever since I was told that I’ve started to evaluate quarterbacks differently. Instead of judging them off of their first year I give them a three year process. The three year mark is a long enough frame because various things come into play within those three years.

In the very first year, a quarterback will often struggle with the pace, flow of the game. They don’t know their teammates as well which could lead to a few chemistry issues. Another problem is that most quarterbacks drafted high in the draft go to bad teams. Due to lack of experience, how are they supposed to be successful right off the bat? And even with those problems, opposing defenses don’t know to fully prepare for them, thus giving them a slight edge.

In year two, defenses are better prepared for the quarterback. They watch film, tapes and a lot of other useful tactics that help in their approach towards stopping them. Quarterbacks struggle and history shows that quarterbacks or any position, for that matter, struggle in the second year. That’s just how it goes.

Only a handful of quarterbacks didn’t endure the second year slump and those pretty much the franchise caliber guys. (Luck, Wilson etc)

Year three is when the player finally comes into their own. They’ve matured. They’ve gained experience. And they’ve seen a variety of defensive looks. Case in point, they’re more comfortable with their surroundings, coaches, players etc.

This evaluation can work for every quarterback, outside of Robert Griffin lll.

Coming in as a rookie RG3 was arguably the best QB in his draft class. He had a tremendous arm, was very dead on when throwing the deep ball and had Olympic level speed. He was a tremendous athlete whose only downfall was not being able to slide at the appropriate times when facing pressure.

Nevertheless during his rookie season Griffin dominated the league. He was one of the highest rated passers. His completion total was decent and he had nice TD-INT ratio. In a week 17 showdown against the Dallas Cowboys Griffin outshined Tony Romo in a game that had playoff implications. RG3 even had a 14pt lead against the Seattle Seahawks in the playoffs following the win against the Cowboys before he got injured.

Unlike year one, year two wasn’t nearly as good.

Problems brew in the locker room between players and coaches; Griffin was injury riddled; the whole Redskins organization was in a flux. At the end of the season Mike Shanahan was fired and the Redskins moved in a different direction. To top it all off RG3 was injured yet again sending his mobility and health into a state of question.

That offseason the Redskins filled a couple of holes. They went and signed Jay Gruden as head coach, brought in safety Ryan Clark (Steelers) and defensive lineman Jason Hatcher (Cowboys) to shore up the defense and even stole wide-receiver DeSean Jackson away from the Eagles. They looked prime for a renaissance if RG3 was healthy and in tip top form.

Last season, RG3’s third year, ended up being a mess as well. He missed bits and pieces of Training Camp/pre-season action and wasn’t fully ready to go week one of the season. Need playbook, new coach and having a new target all added onto his struggles. At one point he even lost the trust of a few teammates.

Last season wasn’t even about football for him. It was more about him finding common ground with his new coach and his teammates, as well as regaining his health the thing that he ultimately failed to do.

Griffin was in & out of the lineup last season as well, but he did show signs of improvement when he was healthy. The jury is still out on whether or not RG3 can be a nice solid QB. His 2nd & 3rd seasons were injury riddled and filled with constant change in regards to the situation around him. (Luck and Wilson have always been in stable environments.)

If anything year 4 will start to tell the true story of Robert Griffin lll. He’ll have more time learn the playbook, get in sync with his weapons and get a better connection with his coach. More importantly he’ll finally be going through an offseason where he is completely healthy. (Hasn’t happened since his rookie year.)

So don’t doubt RG3 just yet. There is still some time left for him. 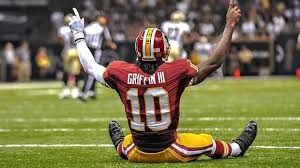 One thought on “One & Done or More to Come?”